With silver and gold from the past two Olympic Games, Marit Bouwmeester (NED) looks well placed to score a hat trick of medals in the Laser Radial at the Tokyo 2020 Olympic Sailing Competition.

The Dutch sailor will be hard pushed to match gold from Rio 2016, however, with a strong field ready to push the 31-year-old all the way. No one can question her commitment to the cause. She has won four world titles over the past 10 years, most recently in 2020.

When she won the Hempel World Cup Series in Enoshima two years ago, Bouwmeester celebrated at a karaoke bar (favourite song: Barbie Girl by Aqua, since you ask). This time though, with COVID-19 rules in place, Bouwmeester is looking to make her boat sing and carry her to another gold medal.

Perhaps the biggest threat to Dutch victory comes from Denmark and Anne-Marie Rindom who looks to improve on her bronze medal from Rio 2016. This will be her third Games and the Dane believes her best years are still ahead of her.

“In London I was young, and I was there to learn as much as possible,” commented Rindom. “For me just going there was a big thing and the result didn’t matter so much. It was a big experience just to go to the Olympics, especially when it was so close to Denmark. Rio was different. My goal was to go home with a medal and I knew that I had a real chance if everything came together. Everything became about how I could achieve this goal. I was preparing a lot. The whole experience after winning the bronze medal was amazing.”

Since Rio, Rindom has put together a stunning few years of world-beating results including world titles in 2015 and 2019, along with a silver medal at last year’s European Championships and the Hempel World Cup Series in Enoshima two years ago. She knows that she will have to put in a complete performance at the Games.

Rindom said, “The conditions in Tokyo are difficult, so learning how the wind reacts is very important. Besides that, I think that mental preparation is the key in winning a medal at the Olympics. At least 10 sailors have the sailing skills to win, but what puts you ahead are your mental skills. In my sailing I try to make everything as simple as possible. And I see that as one of my strengths.”

Rindom is one of a number of female sailors who have enjoyed spending some time training on the SailGP professional circuit, on multimillion dollar 50ft hydrofoiling catamarans capable of speed at least five times what she might expect to achieve on her humble Laser Radial. “I’ve been sailing the Laser for 12 years, and I needed a new perspective on the sport.” Joining the Danish SailGP team on the mid-Atlantic island of Bermuda just a couple of months before Tokyo was a bit of a departure from a typical build-up to an Olympic Games, but no regrets from Rindom. “SailGP is a great opportunity to be a part of and learn from.” 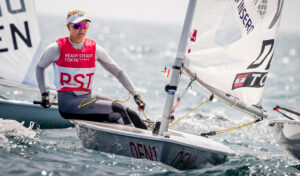 There are bound to be difficult moments during the Games, but Rindom is ready for whatever comes her way. “I am working with a sport psychologist and adversity during big events is something that we prepare for. To be able to visualise those difficult situations and find a strategy to overcome them are crucial. Sailing is not about winning every race but about turning those difficult situations into ‘okay races.’ At the end of the regatta, that is what puts you on the podium.”

Emma Plasschaert’s big breakthrough came in 2018 with victory at the World Championships in Denmark. In 2019 the Belgian sailor first won the READY STEADY TOKYO – Sailing, Olympic test event and then also the Hempel World Cup. A double win on Olympic waters which surely bodes well for her hopes of standing on the podium. The last Belgian to reach the Radial podium was Evi van Acker who took bronze after a breathtaking Medal Race battle at London 2012, and van Acker will be head coach for the Belgian sailors in Tokyo.

“After a difficult year the pieces of the puzzle are slowly falling into place,” says the 27-year-old. Somehow, I was a little relieved the Games got postponed. Before it felt I still lacked some confidence in some areas, especially with tactics, race planning and starts. With the extra time we were able to figure it all out.”

As for her ambitions for Tokyo 2020, “I want to be able to look back on my race with no regrets, knowing that the sailor I showed is the best possible version of myself. Sailing is so unpredictable that sometimes you really can’t control the outcome.”

Talking of that London 2012 Medal Race, where China took gold, the Netherlands (Marit Bouwmeester) silver, and Belgium (Evi van Acker) bronze, the one that missed out was Ireland’s Annalise Murphy.

Having led for much of the competition, the medal slipped away on that occasion. Murphy’s towering height – 1.86m – gives her a huge advantage in strong breeze but the Irish sailor worked really hard on her all-round skills and against all expectations came away from Rio 2016 with Olympic silver. She then turned her attention towards Tokyo 2020 but in a different class, the high-speed 49erFX. Murphy discovered there was too much to learn in too short a time, so she has come back to the Radial and is working hard to be race ready for Enoshima.

“I’m going to the Olympic Games for the third time, it’s just mad!” says the ever-enthusiastic Murphy. “After Rio I spent some time in the Volvo Ocean Race, and really enjoyed being part of a crew so I competed for a while with Katie Tingle in the 49erFX. But as Tokyo came closer, I switched the focus back to the Laser Radial. I think the conditions in Tokyo could suit me, and I know I work harder than anyone else out there – so I’m ready for a good competition.”

Someone who has been working longer and harder on this quest is Paige Railey who has been part of the US National Sailing Team since 2005. Now aged 34, Railey has shifted her focus from the podium to the performance. “I just want to perform well. I want to go out there and execute the things I’ve been training for. If I do that, everything will fall into place.”

Narrowly beaten to Olympic selection in 2008, when the woman that beat her – Anna Tunnicliffe – went on to win the gold medal for USA, Railey has suffered many other setbacks along the way. Not long after the Rio Games where she finished tenth, Railey was diagnosed with an autoimmune disease that forced her to take time away from the sport. But she bounced back and remains as dedicated as ever to the task. In 2008 her older brother Zach won Olympic silver in the Finn and Paige could yet make it a family double.

Like Railey, Great Britain’s Alison Young is a veteran of the past two Olympic Sailing Competitions, finishing fifth in London and eighth in Rio. World Champion in 2016 and world bronze medallist in 2019, Young has always been hard to beat in a breeze and in the right conditions could contend for a medal. 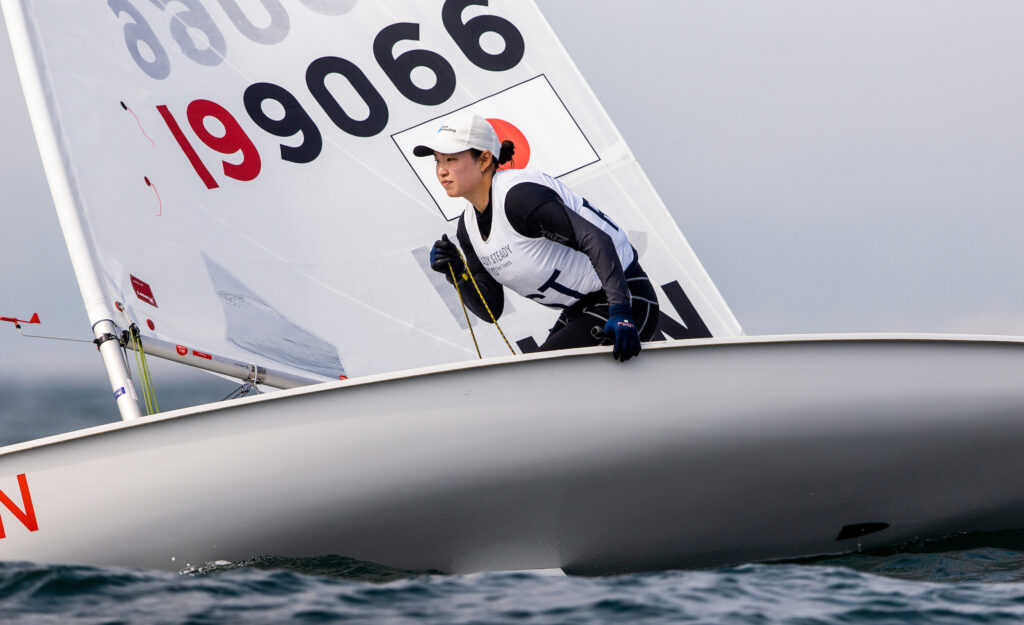 Local fans will be wishing Manami Doi all the best in her bid to win a first ever women’s singlehanded medal for Japan. She is a veteran of two Olympic Games and is still only 27 years old. An eighth place at last year’s World Championship suggests the podium is within reach.

Oldest sailor in the fleet, Tatiana Drozdovskaya (BLR), has competed at four Games going back as far as Sydney 2000. In 2007 the Belarusian sailor won the World Championship and 14 years later, aged 42, Drozdovskaya still craves Olympic competition.

At the other end of the age spectrum is Vasileia Karachaliou who at the age of 24 represents Greece at her first Games. A fourth place at last year’s Europeans along with podium finishes at warm-up regattas in Lanzarote earlier this year suggest she could be hitting her stride in time for Tokyo.

Switzerland’s Maud Jayet says she’s ready for the biggest regatta of her life. “The goal is to fight for the medals as long as possible in the competition,” says the 25-year-old who was fifth at last year’s European Championship. “I don’t want to blow my chances on the first or second day, which has happened to me in the past. This means that I will have to be consistent and avoid big mistakes. We’ll see where it takes me at the end of the competition.”

In 2020 Nethra Kumanan became India’s first woman to claim a World Cup medal in sailing. She clinched bronze at the Hempel World Cup Series in Miami. The engineering student is breaking new ground in a country that shows little interest in sailing. “Most people don’t know sailing exists in India,” she says, but adds, “I think it’s looking good because now we have more people competing in it at a higher level so I think more and more people are getting attracted to it. I am 22 and if someone younger were to come up to me, I’d tell them that this sport takes a lot of time, a lot of hours in the water but it’s all worth it. And you get to travel the world, meet people from different countries and experience them trying to do their best and you try to do better than them.”

The Laser Radial, Women’s One Person Dinghy, is the largest fleet in Tokyo with 44-boats confirmed to take to the start line. Their first race, on the Kamakura racing area, will commence at 1200 JST on Sunday 25 July. Ten races will follow ahead of the Medal Race on Sunday 1 August.