Five years ago, Santiago Lange and Cecilia Caranza Saroli (ARG) set the Games alight with their victory in the Mixed Multihull – Nacra 17 event at Rio 2016. First was the fact that Lange was 54 years old competing in one of the fastest, most athletically challenging events in Olympic sailing. The second was that the Argentinean had scarcely recovered from lung cancer, having had 80% of his left lung removed less than a year earlier.

Just a few weeks short of his 60th birthday will Lange and Carranza Saroli, repeat their gold medal winning heroics of Rio 2016? The Argentineans are certainly ranked among the favourites. But there are many other favourites too in a technical class where new breakthroughs are arriving month after month. No one quite knows who’s going to show up at Tokyo 2020 with a new technique that could be the winning difference.

The Nacra 17 broke new ground in Olympic sailing when it was launched in time for the Rio 2016 Olympic cycle. It was the first event in Olympic Sailing that required mixed gender teams. Since this high-performance 17ft catamaran burst on to the scene eight years ago, crews have been experimenting with which way round works best: male helm/ female crew or female helm/ male crew. Both combinations have proven successful so maybe it doesn’t seem to make that much difference. What is vital is that the helm and crew work in complete harmony, keeping this tricky twin-hulled seesaw in balance at all times. When the Nacra 17 was launched for the four-year cycle leading up to Rio, it was already extremely challenging as a ‘semi-foiler’.

Billy Besson and Marie Riou of France set the pace in the lead-up to Rio, winning four consecutive world titles. Yet when it came to the Games, the French had been caught up for boat speed, and Besson was making his way to the boat each day in a wheelchair with a back injury. All things considered, it was incredible that the favourites still managed to finish sixth at Rio.

Soon after Rio 2016 had been completed, the Nacra 17 was upgraded to becoming a fully foiling machine, capable of flying above the surface. This makes it faster but also more demanding to sail, and it keeps the helm and crew on their toes for every second that they’re foiling over the waves. Nosedives and splashdowns can strike with very little warning, meaning that no race lead is ever guaranteed.

The upgrade of technology has seen a few changes in the pecking order. Italy’s squad came to the fore in the early days of full foiling.  Ruggero Tita and Caterina Banti (ITA) have set the pace for much of the past five years, winning the World Championship along with nearly every other major event in 2018. They were pushed hard all the way by compatriots Vittoro Bissaro and Maelle Frascari who won the 2019 Worlds but Tita and Banti came on strong in the final run-in to Italian selection and narrowly earned their ticket to Tokyo.

The three medal-winning nations from Rio 2016 are still very much in contention in Tokyo – the aforementioned Argentineans along with Australia’s Jason Waterhouse and Lisa Darmanin, who only just missed out on gold five years ago, and the bronze medallists from Austria. With his former crew Tanja Frank now racing in the 49erFX, helmsman Thomas Zajac has been campaigning for Tokyo with Olympic first-timer Barbara Matz.

If winning medals is a game of experience, then no one will be able to match Santiago Lange, participating at his seventh Olympic Games. Lange’s Olympic history goes back to 1988. He was in Seoul, Atlanta, Sydney, Athens, Beijing and Rio de Janeiro. Bronze in 2004 and 2008, gold in 2016, Santi just can’t stay away. This might be the most special Games yet for Lange who, with Saroli 25 years his junior, will be the flag bearer for the Argentine team at the Opening Ceremony.

“I have great respect for all Argentine athletes,” commented Lange, “and to be for a little while the ambassador of all of them in a Games is very special. And it makes me very proud that we can do it together with Cecilia.”

Among the Australian team, Waterhouse is known as the joker, always having a laugh, keeping it light. That’s a pretty good mentality to take into the pressure cooker environment of the Games. He is also flight controller on board the Team Australia AC50 which won Season 1 of SailGP in 2019, all useful high-end racing experience. It helps that Waterhouse and his crew Lisa Darmanin are cousins, an unbreakable family bond that helps see them through the tough moments of a campaign. Darmanin is a self-confessed ‘nerd’, with a degree in commerce and a very cerebral side to her as well as the athletic. However, she’s also extremely driven and excited at the notion of the first female Australian sailor to have won two medals at the Games. The Aussies are very much in the frame for gold.

For Gimson it has been a long, hard road to his first Olympic Games. The 36-year-old has been trying to earn his spot with the British team for more than 15 years. His career has seen him race everything from 470 dinghies to Tornado catamarans, as well as working behind the scenes with Iain Percy and the Artemis Racing team across two America’s Cup cycles. He has sailed as tuning partner for Britain’s Three Blondes in a Boat who won Olympic gold in 2008 in the women’s keelboat, and again was tuning partner for Iain Percy and the late Andrew ‘Bart’ Simpson in the Star class for London 2012.

So Gimson understands the mechanics of campaigning at the highest level, and with crew Anna Burnet he is now about to set sail for Great Britain in Enoshima. “With this campaign now I’ve put everything that I’ve learned over the last 15 years together to build a solid campaign alongside Anna, who’s by far the best team mate I’ve ever had,” explained Gimson.

“It’s been a long journey but I’ve always had an inner belief that if I could put everything together and also get a bit of a break I could go to the Games. Ever since I was a kid I’ve dreamed of going to the Olympics and I wasn’t prepared to let that go until I felt I’d fully attacked it for a whole cycle. This is the first real opportunity I’ve had in the right boat, being the right size and sailing with the right person.”

Victory at the 2020 World Championships is a clear indicator that Gimson and Burnet are aiming for a medal, and quite possibly the gold.

Two years ago, whichever Italian team went to the Games would probably have been considered the favourite. Tita and Banti set the pace for downwind foiling technique and, while others have pretty much closed the speed gap on the Italians, this team are still among the elite group who could win Tokyo gold. 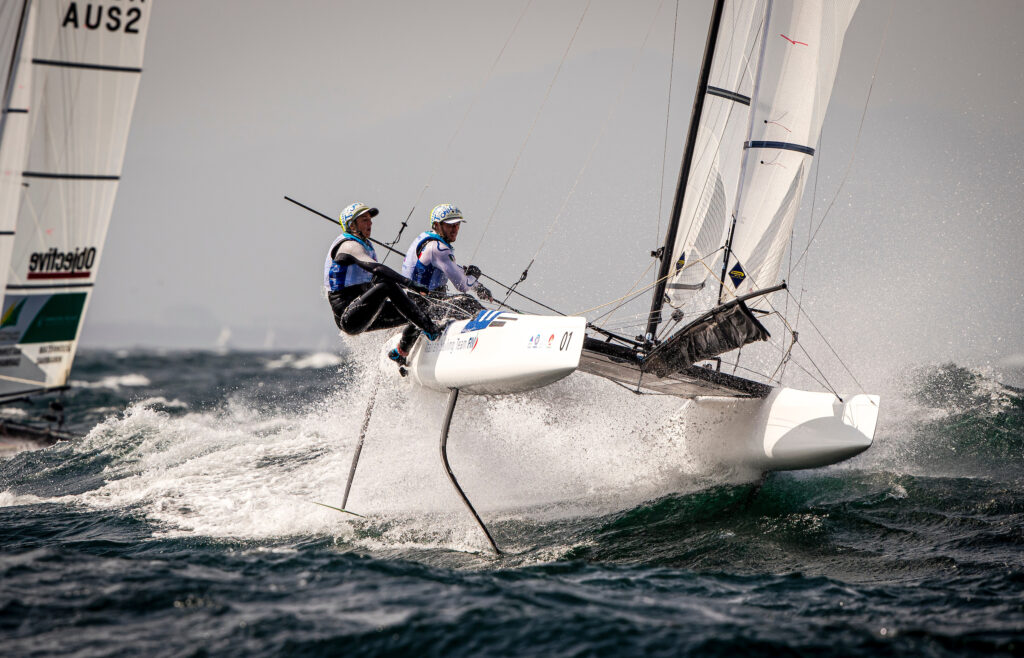 “We are finishing up the last details,” says Tita. “In the last five years there has been a lot of work and a great deal of consistency. We started performing in 2017, winning the European Championship. What we have achieved, with ups and downs along the way, has been very high quality.”

Some things a sailor can never control, however. “The concern is the weather scenario, typhoons pass every four weeks, and this can affect the week of racing. But let’s see. What will be, will be.”

What of the French, mentioned earlier? Besson and Riou campaigned again for Tokyo, but were outgunned by a younger team, Quentin Delapierre and Manon Audinet. With a fourth place at last year’s World Championship and, perhaps more importantly, victory on Olympic waters two years ago at the Hempel World Cup Series Enoshima, Delapierre and Audinet have started to get the kind of results to put them in the frame for a top three finish.

“A medal is clearly our goal,” says Audinet, “but above all to succeed in sailing at our best level without being overwhelmed by the scale of the event.”

While not in the top tier of favourites for a medal, it wouldn’t be too much of a surprise to see Germany’s Paul Kohlhoff and Alica Stuhlemmer right in the mix. Their campaign has had its hair-raising moments. When training in Enoshima on a previous occasion, the Germans had a close encounter with nature that they’d rather not repeat.

“We were sailing fast downwind, around 25 to 30 knots, when in front of us suddenly we saw a huge fish,” says Stuhlemmer. “Its fin appeared out of the water and Paul immediately steered an evasive manoeuvre. We crashed and stopped – from 100 to zero.

Since finishing 13th at Rio 2016 it has been a rollercoaster journey for Kohlhoff who in 2017 suffered a brain haemorrhage and needed to undergo life-threatening brain surgery in Mallorca. He returned determined and grateful to continue living the great Olympic dream.

“Anything could have happened,” says Kohlhoff. “The fact that I am more fit than before is partly because I want to be even more successful than before.”

There is so much depth in the Nacra 17 fleet, with a number of teams who are quite capable of rising to the occasion. 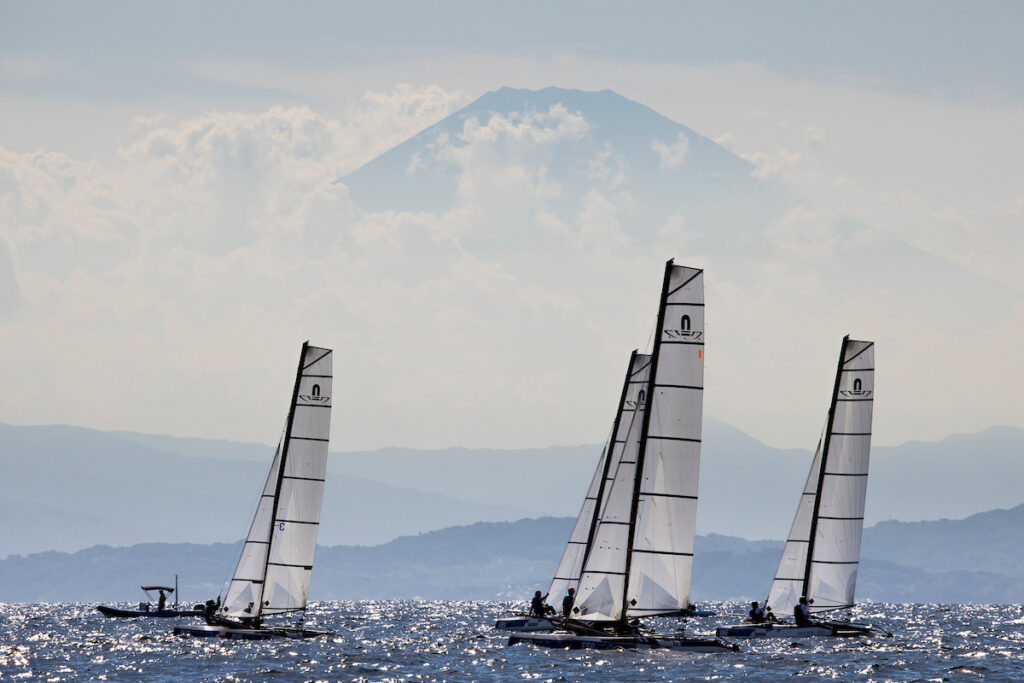 Bronze medallist five years ago, Zajac along with Matz could come good on the day, despite a patchy record in recent seasons.

Spain’s Tara Pacheco won the 470 World Championships 10 years ago so clearly has the head for the big occasion. Sailing with Florian Trittel, Pacheco has achieved some strong results over the past four years – second at the 2017 Worlds, fifth in 2019 and sixth in 2020. Trittel has been competing on the SailGP circuit in between Olympic commitments, and that high-pressure competition in foiling 50ft catamarans can only help with all the challenges of racing a foiling 17ft catamaran at the Olympic Games.

Another team with a female helm and male crew is the Danish pair of Lin Cenholt and CP Lubeck whose scores at the last three World Championships read 4,2,8, although their track record in Enoshima is not so strong. Three years ago Lubeck required surgery after severely injuring his lower leg when falling overboard during training. His trapeze hook broke, and as he hit the water the rudder foil caught him badly on its way past. It’s one of the hazards of high-speed foiling and the most recent injury in the fleet was to Erica Dawson, representing New Zealand along with helmsman Micah Wilkinson.

When training in Australia little more than four weeks ago, Dawson broke her fibula in her lower leg. Initially it looked like there would be no way she’d be ready in time for Tokyo. But in Tokyo she is, and it looks like the plucky Kiwi will be ready to go.

“There have been many tears,” she wrote on her Instagram page. “But also managed many laughs despite the situation we are in. I will do my absolute best for a speedy recovery to be on that start line with Micah and come out stronger.”

The Nacra 17 fleet will see 20 boats take to the start line. They are scheduled to sail a 12 race series with the first starting gun sounding at 1430 on Wednesday 28 July on the Kamakura racing area. Their Medal Race on Tuesday 3 August will bring their competition to a close.